Mention Memphis, Tenn., and the mind  trips  down  Beale Street.
The ears hear blues, the mouth starts watering for BBQ and eyes can almost see “the King in the Jungle Room” at Graceland. A stone’s throw from this city on the mighty Mississippi River is Southaven, Miss., with a reputa- tion built on another purely American classic—baseball!

More than 2,000 teams per season, from all corners of the U.S., journey    to Snowden Grove Park in Southaven for tournament play. Built in 1999, Snowden Grove has become Mecca for budding athletes  of  the  diamond.  In a statement echoed by many, Chris Slayton of the Warhawks Baseball Club in Decatur, Ala., writes: “Without excep- tion, this is the one place we look for- ward to all year; no one, and I mean NO ONE, does it better! Win or lose, our team has a great experience in baseball!” Asked to explain the success, Mayor Greg Davis says it was one of finding the city’s identity. “As a young city in 1980, our parks were on vacant land. As we grew to a full-service community, we made the decision to invest in our youth.  We   felt  the  best  deterrent  to youth crime and vandalism was to have the youth involved in activities. In the last seven years we have invested $15 million in our parks department.”
It’s one thing to build parks. It’s another to maintain them year after year. The elements seem simple—facilities, equipment and staffing. The execution, as one may well expect, is not always so simple. Keeping the facilities competi- tive takes the commitment of the mayor, the board, and, of course, the parks and recreation staff. Southaven’s team has hit one out of the park with Snowden Grove! 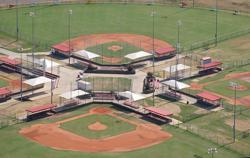 Build It And They Will Come

The impetus to develop Snowden Grove Park started with the donation of 150 acres of land worth between $4 mil- lion and $5 million on the east side of town. The west side had soccer and football fields, the center of town the girls’ softball fields. The decision seemed obvious. Create something the city did not have. Snowden Grove Park would be the baseball facility.

Many of the features found at Snowden Grove previously were found only at professional stadiums. Each of the 17 fields features grass infields and out- fields with sub-surface drainage and com- puterized irrigation systems, lighting that substantially exceeds the minimum youth field requirements, electronic scoreboards and covered and enclosed dugouts.

Added to the field amenities are a main concession area with two 50-foot by 100-foot-long pavilions with picnic tables, portable concession kiosks throughout the park, a VIP area on the second level of the main concession, an on-site gift shop, side walks throughout the complex, profes- sional landscaping and ample paved park- ing. Players, parents, siblings and coaches are well cared for at Snowden Grove.

Initially intended (and still used) for the recreational use of Southaven residents, it didn’t take long for amateur baseball groups to find Snowden Grove and book it for tournaments. A year after the park’s opening, the State of Mississippi in 2000 awarded the City of Southaven the prestigious Economic Development Award for the positive impact the park has had on the local economy. Fifty percent of the parks budget now comes from tournament income. “It makes it easy to expand our programs when taxpayer burden is half,” says the mayor.

Snowden Grove Park has hosted and continues to host many of the major tournaments held in the amateur base- ball and softball world. The United States Specialized Sports Association (USSSA) World Series has held events at Snowden yearly since it opened. The National Amateur Baseball Federation World Classics just signed another three- year contract. The Dizzy Dean Baseball World Series in the eight, nine, 13, sophomore, junior and senior divisions will play at Snowden through 2009.

Critical to the success of any base- ball park is the quality of umpiring officials—the folks most players and coaches love to hate. If you have ever played baseball or softball, do your experiences match these? “The strike is consistent for both teams.” Umpires are “skilled professionals.” “Even questionable calls left you smiling after talking to the umpire.” Scotty Baker, program manager, keeps a tight rein on the umpiring staff. “Umpiring chiefs have developed an excellent system of screening potential umpires,” he says. “Each candidate is a high school-certified state umpire and receives additional training by Snowden staff. We have an ongoing review process, and when we have problems they are quickly addressed,” says Baker.

Perhaps the fact that Mayor Davis umpired in Memphis for eight years is a factor as well.

City Administrator Chris Wilson states the city’s philosophy when he says that Southaven is  constantly  looking  at improving its facilities. Among recent improvements, Wilson describes the following.

In 2002, Mayor Davis and the Board of Aldermen voted to build a “Field of Dreams”—a baseball field to accommodate handicapped and mentally chal lenged children and adults. The concept plan adopted by the city called for a three-field complex with parking and concessions. The decision was made, however, to move forward with a single field, parking and a pavilion with addi- tions to come in the future. A private donation of $500,000 seeded this project. “Snowden Grove is already the country’s showplace for youth baseball,” said Mayor Davis. “With the addition of the Field of Dreams, it will become the crown jewel.”

By 2005, the city was receiving comments from Snowden Grove clients that shade would be welcomed. In 2006 the comfort level of park patrons increased with the installation of 41 Shade Systems shades. The effort did not go unnoticed. Phillip Allison, whose team participated in the 2006 USSSA 10AAAA World Series last July, wrote: “The canopies over the bleachers were greatly appreciated!”

The park staff benefited with the selection of Shade Systems products as well. In addition to the quality and warranties, they also have a patented Turn-N-Slide easy-fastening system to allow for quick removal and re-attachment by park staff, eliminating the cost of expen- sive outside installers each season.

WiFi is now available at the fields, allowing parents either to work or to update family and friends on athlete and team performance instantly. Next on the to-do list is the retrofit of one of  the fields into a 2,500- to 3,000-seat stadi- um to house high school and collegiate baseball games.

Is Southaven accomplishing its goals? Despite rising youth population, the crime rate remains low, 1.7 percent compared to Memphis’ 17.5 percent. Is it the premier youth sports venue of the Southeast? Mayor Davis says he’s heard of a facility in Texas that built 18 fields, but he’s not worried. Southaven has the bases loaded and is up to bat!  PRB

Linda Stalvey is a freelance writer and regular contributor to Parks & Rec Business who gave up Washington, D.C., public relations to indulge her passion for parks, environment and outdoor activities in Medina, Ohio. You can reach her via e-mail at lstalvey1@verizon.net.